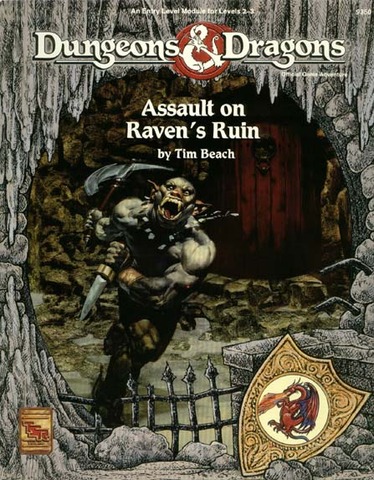 ATTENTION: ALL ENTRY LEVEL DUNGEON MASTERS AND PLAYERS!
THE SCEPTER OF TRUTH HAS BEEN STOLEN, AND A CALL HAS GONE OUT FOR A FEW BRAVE HEROES TO BRING IT HOME

In the canyon of Thunder Rift, in the village of Kleine, goblins have always been a nuisance, but the natives have dealt with them and continued an otherwise peaceful existence. Now, a valuable magical item, called the scepter of truth, has disappeared! The ingenuity of the crime bears the mark of the goblins' leader, the Master Thief Raven. The scepter must be recovered, but there is no one in Kleine with the strength and courage to penetrate Raven's trap-laden hide-out, deep in goblin territory. A party of stout adventurers might survive the mission, but they will have to be quick, smart, and especially careful.
This module has been created especially for the inexperienced Dungeon Master and players who are interested in the exploration of dungeons and ruins.

Recommended for four to six characters, level 2-3
A large map sheet and stand-up figures are provided
Only the DUNGEONS & DRAGONS Game Box is needed to play this adventure
Can be used in conjunction with several other adventures and accessories based in Thunder Rift, or it can stand alone
Features easy-to-follow rules for smoother role-playing