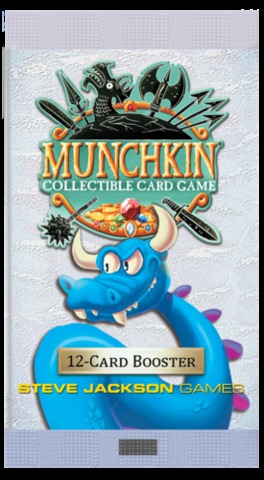 Eric Lang and Kevin Wilson deliver something new in the Munchkin universe: a fresh new collectible card game that holds up to competitive-level play but still retains the goofy silliness for which Munchkin is famous. Munchkin Collectible Card Game is a combat game in which 2-4 players level up turn after turn, put loot into play to give themselves benefits, and attack (or bluff attacks!) against one another. Eliminate the other player first, and you win! In the words of co-designer Eric Lang, "'[Munchkin Collectible Card Game] is a very different game from Munchkin. Imagine all the awesome humor of Munchkin as a short, competitive head-to-head slugfest." The card game will be distributed as fixed two-player starter sets and randomized booster expansions.

Every Munchkin Collectible Card Game booster has 12 random cards, including at least one rare card, so players can build their own decks to surprise their opponents!