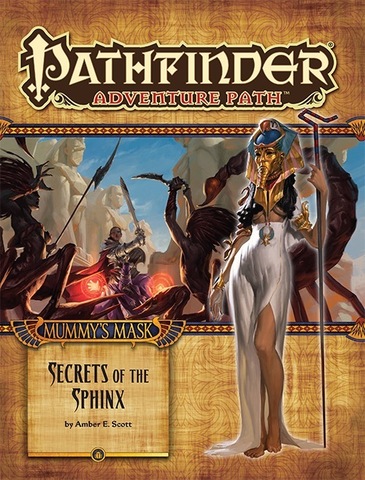 Pathfinder Adventure Path #82: Secrets of the Sphinx (Mummy's Mask 4 of 6)

Deep in the Osirian desert stands the blank-faced monument known as the Sightless Sphinx. In search of the stolen mummy of Chisisek, the architect of the flying tomb of the Sky Pharaoh Hakotep I, the heroes track the cult of the Forgotten Pharaoh to its secret headquarters inside the sphinx. There they must face monstrous mercenaries and servants of the demon lord Areshkagal before finally confronting the masked cultists and their leader, the Forgotten Pharaoh, who has been possessed by a fragment of Hakotep’s soul. This volume of Pathfinder Adventure Path continues the Mummy’s Mask Adventure Path and includes: "Secrets of the Sphinx,” a Pathfinder adventure for 10th-level characters, by Amber E. Scott. An exploration of the sinister world of curses, by Russ Taylor. Two exciting additional encounters in Osirion’s wastes, by Greg A. Vaughan. Reptilian rage and unexpected rescue in the Pathfinder’s Journal, by Amber E. Scott. Five new monsters to challenge player characters, by Michael Kortes, David Schwartz, and Larry Wilhelm. Each monthly full-color softcover Pathfinder Adventure Path volume contains an in-depth adventure scenario, stats for several new monsters, and support articles meant to give Game Masters additional material to expand their campaign. Pathfinder Adventure Path volumes use the Open Game License and work with both the Pathfinder RPG and the world’s oldest fantasy RPG.